In the Summer of 2015 when Calliope was about 6 weeks old, I took the decision to stop my dairy intake. She had pretty much screamed from the moment she arrived, and continued until roughly 5 months old. She had developed baby acne as little as 12 hours post birth, was sick after every feed (breastfed), belly ache, awful bouts of nappy rash and poos and of course the non-stop screaming.

Taking her to our GP, I was simply told that babies cry…

I chatted to some breastfeeding experts via online (online really can be a magical place), when I then took the Dairy Free route, within days her skin cleared up, she was still very much crying, but there was time of relax, she was beginning to differ, which was when I chose to get a second opinion, explained what had been happening, it was then agreed she wasn’t just “a crying baby”, we were referred to a dietitian. We also found things with wheat and gluten aggravated her, made her sick and the belly ache too.So  I eliminated that from my diet too. But this was temporary and just over a year old she seemed to be able to tolerate the new diet.

At 18 months old after failing the Milk Ladder at step two, we’re currently awaiting our next appointment with our dietitian.

That was the tiny background about our dairy free journey.

The thing that strikes me is the lack of tolerance (pardon the pun) people can have in regards to allergies and small children. (Although I presume it would be the same for adults). It certainly hasn’t been a life style choice, no swapping or changing like having no meat one month, and then 50 bacon sandwiches the next.

“Is she over that yet?” Repeatedly, that accompanied with the eye roll when you tell people that Soya, which was once an ok thing to have, is now a no, no.

“It is Christmas, one chocolate won’t hurt.”

Having to disappoint your 18 month old, as she sits and watches her siblings eat the Dairy Milk Selection box destined for her. “I’m sorry you can’t have that”.

You see, the cheese, the chocolate, the sip of milk will hurt her. The reactions can be unpredictable but at best the reactions comes out as a form of acne, or a stinky mucous nappy, that burns her. But then there is the awful tummy ache, the crying in pain that comes with it, the wheezy chest, the shortness of breath. It is miserable for her and is worrying for us as her parents to sit back and watch. As most of the time, we’re told to ride it out, there isn’t a lot else we can do, well at least we haven’t been told if there is anything else.

There have been questions as to whether my HG medication may have unsettled her tummy, which for me adds to the guilt of causing this for her, so if I need to be strict and come across rude, it is only because I need to protect her.

It has certainly been an eye opener, in particular how hard it has been, in coping. I remember shutting myself in the down stairs toilet crying, because she was crying in pain again, I felt useless, I felt to blame. For this is one reason I am very grateful to have had a baby carrier. It helped us both.

It isn’t just a case of not being able to have this or that, but what goes on behind the scenes the struggles parents have, the tears people don’t see behind closed doors.

We’re lucky to only have a couple of things which don’t agree with her.

Please remember if an allergen is a no, for every single day of the year, then it’ll be the same at Christmas. Think. 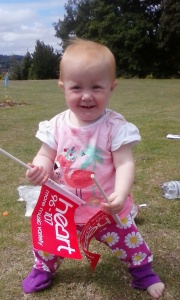 (Taken back in the Summer).

We didn’t choose this, I hope one day she’ll grow out of it.

One thought on ““You Can’t Have That””