Juliet Mckelvey and Sarah Foley set up the troupe 20 years ago when Juliet’s daughters Samantha and Hannah showed an interest in wanting to be Majorettes. 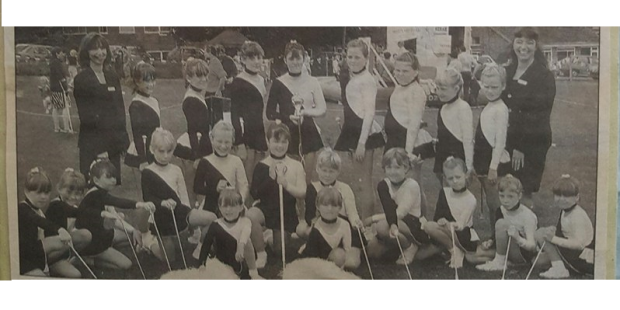 With both girls continuing until they were of an age where they could no longer compete, and Samantha took on the role of training the Tiny Tots Section, while Sarah and Juliet continued to train the Junior and Senior Sections, training once a week in Merriott Village Hall and Tithe Barn.

The Majorettes also have a committee of helpers who, give up a lot of time, to ensure the smooth running of the troupe and events.

The troupe currently made up of girls and boys, with the youngest being 3 right up to 19 years, competing through the South West, they saw a successful competition season in 2016 bringing home 42 trophies. In addition to competing, they display at various fetes and fundraisers, as well as performing at the Somerset Carnivals.

To celebrate 20 years Merriott Majorettes hosted a Charity Competition, inviting other troupes from across the South West to compete, which raised £1000, giving £500 for each of the two chosen charities – Bristol Children’s Hospital and The Brain Tumour Charity, chosen by Samantha who recently lost her step sister to a Brain Tumour, whilst Bristol Children’s Hospital was chosen because of the treatment Samantha’s step-niece received whilst undergoing major heart surgery.

Juliet and Sarah are hoping that the troupe will try and host another Charity Event every year, with 2017 being in aid of Cancer Charity; St Margaret’s Hospice and Baby Loss Charity; Towards Tomorrow Together, both Charities close to the troupe’s hearts.

If anyone would like to show their support for these events, or see what’s next for us, please find us on our Facebook Group

When asking Sarah and Juliet on thoughts for the next 20 years?

Merriott Majorettes are looking forward to a successful 2017.